.....Left to Right: Hashim Thaci, UCK (KLA) leader; Bernard Kouchner, UN Administrator of Kosovo; Gen. Sir Michael Jackson, KFOR Commander; Agim Ceku, Commander of KPC; Gen. Wesley Clark, NATO Commander....From 1992 to 1995, the Pentagon flew thousands of al-Qaeda mujahidin from Central Asia into Europe, to fight alongside Bosnian Muslims against the Serbs. The mujahidin were ‘accompanied by US Special Forces equipped with high-tech communications equipment. Bin Laden’s mercenaries were used as shock troops by the Pentagon ‘to coordinate and support Bosnian Muslim offensives’.The pattern continued in Kosovo, where ethnic violence broke out between Albanians and Serbs. Why the Balkans? Gen. Sir Mike Jackson, then-commander of NATO troops in the region/Balkan/, summed it up in 1999: ‘We will certainly stay here for a long time in order to guarantee the safety of the energy corridors which cross Macedonia.’ The General was talking about the Trans-Balkan pipeline passing through Bulgaria, Macedonia and Albania, planned to be a primary route to the West for Central Asian oil and gas.http://www.wsws.org/articles/2002/apr2002/oil-a29.shtml.......................http://michaelparenti.org/yugoslavia.html 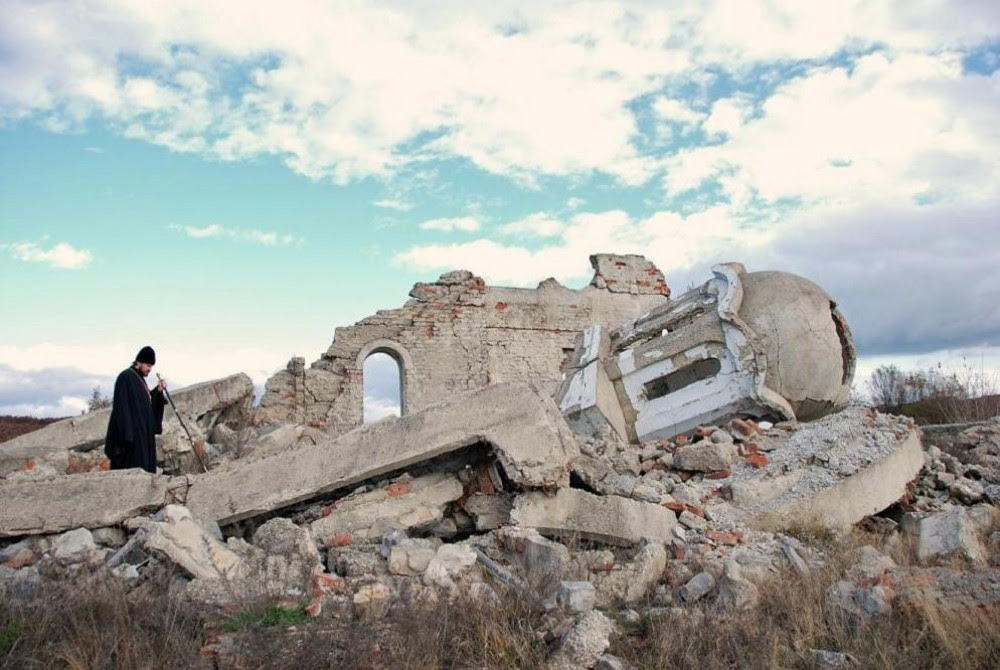 
Serbs will never again live under muslim rule. They already did that for four hundred years and they aren't going back.

There are more churches, monasteries and other Christian landmarks per square kilometer in Kosovo than anywhere else on earth. Kosovo is to Serbian Orthodox Christians what Canterbury is to Anglicans and the Vatican to Roman Catholics. Kosovo (or Kosovo and Metohija in Serbian or Kosova in Albanian) was the political center of mediaeval Serbia and makes the very essence of Serbian spiritual and cultural identity and statehood since the Middle Ages up today.In 2001, the civilized world was outraged when the terrorist Taliban regime in Afghanistan demolished two gigantic statues of Buddha. But the post-1999 destruction and desecration of Christian churches and monasteries by mobs of Muslim Albanians in the Serbian province of Kosovo is barely noticed... The truth about Kosovo, Albanian jihad terrorism, organized crime (drugs, weapons, sex slaves including children, destruction of churches / monasteries and attacks on Christian Orthodox Serbs by Muslim Albanians is becoming impossible to ignore. Still, incredibly, elements of the international community including some sectors of the U.S. government and important voices in Congress have accepted the idea that the only “solution” for Kosovo is to detach it formally from democratic Serbia and create an independent Islamic state! This would mean the eradication of the remaining Christian Serb population from the historic cradle of their spiritual and national life. It would also mean officially handing power to the criminal and jihad terrorist leadership of the supposedly disbanded “Kosovo Liberation Army” (KLA), who would then become the “sovereign” government of a new state in Europe! http://www.globalresearch.ca/index.php?context=va&aid=8182.................http://edition.cnn.com/2004/LAW/08/18/albanians.mob/...............

. Brandnew Wahabi mosque in Christian Kosovo...In the aftermath of the war, hundreds of Wahhabi mosques and schools, thanks to the contributions of wealthy Saudis, now appeared in every town and hamlet throughout the country. Kosovo has served as a terrorist transfer zone, in which Wahhabi-run villages and mosques became safe harbor for foreigners wanted in Western Europe or in their own countries for terrorism links.The direct connection between terrorism and narcotics trafficking has been revealed on numerous occasions, as with Norway’s September 2006 arrest of al Qaeda operative Arfan Qadeer Bhatti. He and his accomplices were planning attacks on the US and Israeli embassies in Oslo; according to Norwegian news reports, they even planned to behead the Israeli ambassador. This Pakistani terrorist had connections with a Kosovo Albanian drug lord and even visited Pristina and Pec, a small town in western Kosovo, where he could administer to one of Kosovo’s largest Wahhabi flocks.http://global-security-news.com/2011/04/30/bosnia-and-kosovo-radical-islam-organ-trafficking-and-media-bias/

..Albanian KLA Sadik Cuflaj and his son Valon (on his left) with beheaded Serb Bojan Cvetkovic. Another Serbian head in his right hand...The KLA are the bin Laden-trained, Iran-backed narco-terrorists whose 1999 jihad against the Christian Serbs we helped fight, abetting secession and creating a mono-ethnic terror haven and future Islamic republic in Europe. The KLA was supported from the outset in the mid-1990s by the CIA and Germany's intelligence agency, the Bundes Nachrichten Dienst (BND). In the course of the 1999 war, the KLA was supported directly by NATO.    .http://www.wsws.org/articles/2010/dec2010/pers-d31.shtml 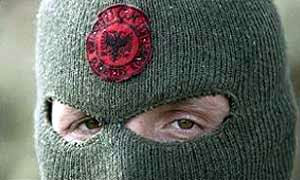 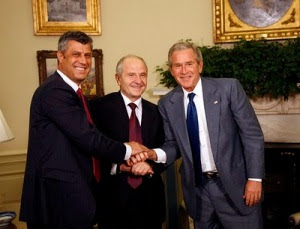 Hashim Thaci (Left) - the Kosovan Prime Minister is alleged to have close links with the mafia.......Reports compiled by both the Council of Europe and the German military have claimed that Hashim Thaci, Prime Minister of Kosovo, ran a powerful Albanian Mafia group controlling racketeering and heroin trade in the Balkans, and has alleged they even murdered Serbian captives to sell their organs on the black market (These allegations have always been denied by the KLA – the original version of the report is available here). 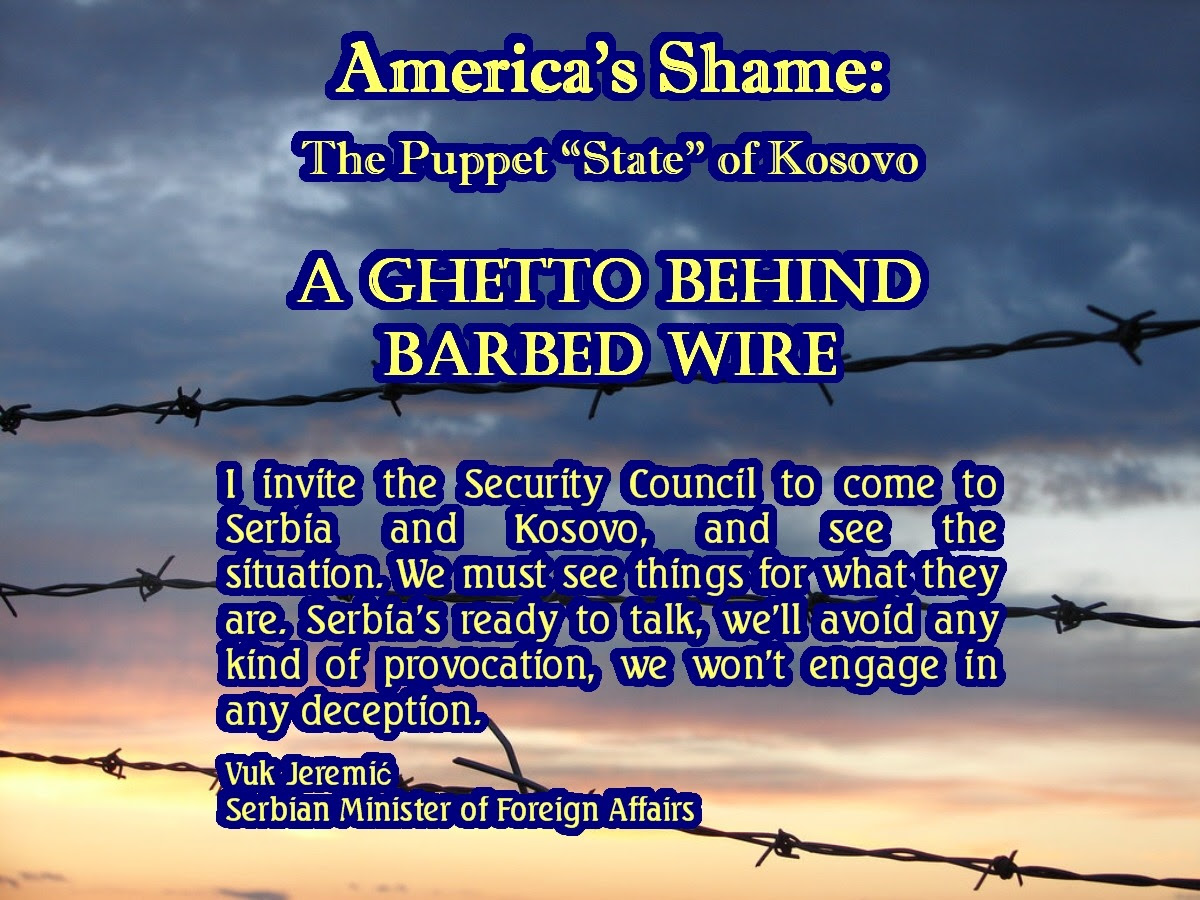 ..A report by the Council of Europe describes Kosovo today as a country subject to “mafia-like structures of organised crime”. It accuses KLA commander and current prime minister, Hachim Thaci, of heading a criminal network involved in murder, prostitution and drug trafficking.This may come as no surprise to those who have witnessed his rise from terrorist thug to head of the newly “independent” state. But what will be a shock to many is the grotesque way in the KLA helped finance its operations—by removing and selling body organs from kidnapped Serb prisoners. The practice recalls the barbaric human experiments carried out by the Nazi “Angel of Death” Josef Mengele in the Auschwitz concentration camp....http://www.guardian.co.uk/world/2010/dec/14/kosovo-prime-minister-llike-mafia-boss ...............               http://www.youtube.com/watch?v=47BGFiZISpg&feature=related...................http://activitypit.ning.com/forum/topics/albanian-mafia-in-ny-37

..NATO tries to force christian Serbs to submit to criminal Albanian muslim “authority”. http://www.en.beoforum.rs/comments   ....... How come NATO can enter a civil war and take sides against the legitimate government forces, against UN law, how can NATO side with Islamist terrorists and continue to perpetrate terrorist acts day after day after day...and nothing happens? Simple: international law does not exist. 
Here’s a trailer to another film by the same director… see the TRUTH about the murder of Federal Yugoslavia…http://www.thirdworldtraveler.com/Parenti/RationalDestruc_Yugoslavia.html...............http://www.medienanalyse-international.de/wimmer.html

Putin – Europe, are you not ashamed ? Declaration of independence of Kosovo – is immoral and illegal————————————Novak Djokovic: „This is one of the worst moments in history of Serbia“ ........The Balkans Chronicles -archives-http://szrzlj3.blogspot.com/2012/05/balkans-chron.html